Forums: Politics, Trump, American Politics
Email this Topic • Print this Page
4
Reply Wed 27 May, 2020 03:27 pm
@coldjoint,
I certainly do and it certainly does immediately loft itself into woowoo land(not the definition, the idiotic interpretation of it. That first sentence). extraordinarily stupid).
1 Reply
Below viewing threshold (view)
-11
Reply Wed 27 May, 2020 03:38 pm
@MontereyJack,
Quote:

You clearly are so blinded

Me? What about what Obama did? Why is he above the law? How about the FBI shitting on peoples civil rights? How about Democrats and the media lying for three years?

She tweeted 7 stories that prove voter fraud is not a myth.
https://www.redstate.com/sister-toldjah/2020/05/27/media-becomes-triggered-after-kayleigh-mcenany-fact-checks-twitter-over-mail-in-ballot-fraud-claims/
0 Replies
6
Reply Wed 27 May, 2020 04:55 pm
Trump said 100,000 deaths? Fake news. Anyway who cares as long as it doesn't interfear with my ability to make money or my golf game. After all the lower classes are supposed to die for us upper classes. Right?
2 Replies
Below viewing threshold (view)
-9
Reply Wed 27 May, 2020 05:02 pm
@RABEL222,
Quote:

After all the lower classes are supposed to die for us upper classes. Right?

Promoting class welfare and division was one of Obama's successes, and setting race relations back 50 years.. The damage it has done is enormous.

Twitter—The Big Lie Of Our Time

Seems like we (some of us) are dealing with a lot of those. Some are not dealing with them and it will eventually bite their asses.

“Comedian and perennial Trump antagonist Kathy Griffin is advocating for the physical assault of the president, tweeting that she wants someone to stab the commander in chief with a “syringe with nothing but air inside” — a potentially lethal act if it creates an embolism. (Breitbart, May 27, 2020)
Physically threatening?

Physically threatening? How about calling to the cause someone who would kill or assassinate the president?

“Physically threatening the president of the United States is a federal offense. Physical threats also constitute a violation of Twitter’s terms of service that can result in permanently getting kicked off the platform. (Breitbart, May 27, 2020)

“We will immediately and permanently suspend any account found to be posting violent threats,” the social media giant says on its official site.”

A key figure behind the U.S. investigation into links between Russia and President Donald Trump’s 2016 election campaign will testify next week before a Republican-led Senate committee examining the origins of the probe, the panel said on Wednesday.

True. He shits his Depends everyday.

Actually it doesn't. Trump's used Depends stay at the WH.

And you ask somebody if they are four?


A former staffer on The Celebrity Apprentice is breaking his NDA and spilling the beans on the Trump family. More specifically, he’s spilling the beans on the president himself…as well as some very personal details.
Former talent handler and current stand up comic Noel Casler talked about working with Donald Trump on The Apprentice and his teen beauty pageants in the 90s.
According to Casler, Donald Trump is a “speed freak” who snorts Adderall, which is something we pretty much guessed—and he’s also invited teen beauty pageants up to his suite, which we pretty much knew already.


But Casler also claims that Trump uses adult diapers.
Casler tweeted, “Anyone who thinks I’m joking about Trump wearing Depends should watch this vid…I’m not, it was a known fact on ‘Apprentice’ he is incontinent from all the years of stimulant abuse and fast food. Right Don?

I don't care. It does not effect his job performance. Do you insult all people that wear adult diapers or just Trump?
0 Replies
Below viewing threshold (view)
-13
Reply Wed 27 May, 2020 11:56 pm
Quote:

Sorry liberals—while unicorns, monsters, and comb-overs that look good, do not exist–voter fraud does exist. Also true is the fact that the same folks who kept telling anyone who would listen that Russia rigged our elections and the Trump team helped, also swear to us that our elections are tamper-proof and cannot possibly be vulnerable to fraud. Not too hypocritical?

Since the inception of this insanity, the following regulations, rules or consequences have occurred: I won’t get COVID if I get an abortion but I will get COVID if I get a colonoscopy. Selling pot is essential but selling goods and services at a family-owned business is not. Pot wasn’t even legal and pot dispensaries didn’t even exist in this state until five months ago and, in that five months, they have become essential but a family-owned business in existence for five generations is not

A family of six can pile in their car and drive to Carlyle Lake without contracting COVID but, if they all get in the same boat, they will. We are told that kids rarely contract the virus and sunlight kills it, but summer youth programs, sports programs are cancelled. Four people can drive to the golf course and not get COVID but, if they play in a foursome, they will. If I go to Walmart, I won’t get COVID but, if I go to church, I will. Murderers are released from custody while small business owners are threatened with arrest if they have the audacity to attempt to feed their families.

These are just a few of examples of rules, regulations and consequences that are arbitrary, capricious, and completely devoid of anything even remotely approaching common sense.
***
The defendant in this case orders you to stay home and pronounces that, if you leave the state, you are putting people in danger, but his family members traveled to Florida and Wisconsin because he deems such travel essential. One initial rationale why the rules don’t apply to him is that his family farm had animals that needed [to be] fed. Try selling that argument to farmers who have had to slaughter their herds because of disruption in the supply chain.

When laws do not apply to those who make them, people are not being governed, they are being ruled. Make no mistake, these executive orders are not laws. They are royal decrees. Illinois citizens are not being governed, they are being ruled. The last time I checked Illinois citizens are also Americans and Americans don’t get ruled. The last time a monarch tried to rule Americans, a shot was fired that was heard around the world. That day led to the birth of a nation consensually governed based upon a document which ensures that on this day in this, [or] any American courtroom tyrannical despotism will always lose and liberty, freedom and the Constitution will always win.

Pritzker is a Democratic fascist.
https://www.powerlineblog.com/archives/2020/05/americans-dont-get-ruled.php?utm_source=feedburner&utm_medium=email&utm_campaign=Feed%3A+powerlineblog%2Flivefeed+%28Power+Line%29
0 Replies
4
Reply Thu 28 May, 2020 01:09 am 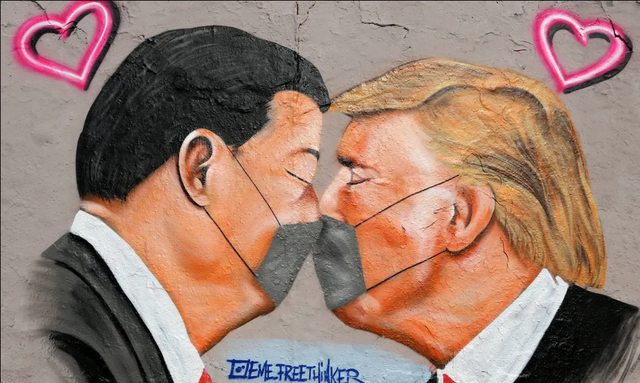